It's another card game from Fantasy Flight! It's got the Star Wars licence! It's not an LCG? WHAT? 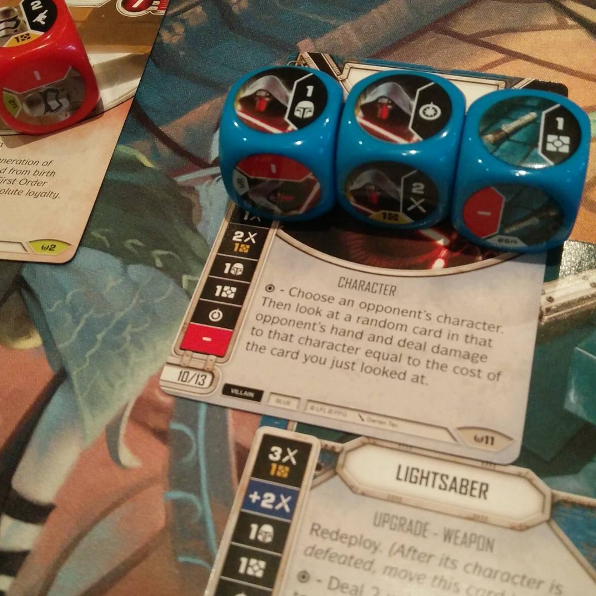 I saw Star Wars Destiny then forgot about. I thought it was impossible for FFG to put out two Star Wars card games at the same time. That'd be madness surely? WELL, NO. Rob got two starter sets and we played a it today!

It's a symmetric a primarily 1v1 game where you control a couple of characters from Star Wars who've brought along some pals and gear. On your turn you'll be generating resources, playing cards, and rolling dice all with the aim to murder your opponents characters.

DICE? DICE?!?! YES. It's a card and DICE game! Some cards are going to have dice attached to them. Lovely big custom dice that have different card related things on each side. Combat damage, gaining resources, and other guff are fuelled by rolling the right icons on the dice. Some special and powerful card abilities are only triggered by rolling a specific icon. We REALLY enjoyed the dice. They are balanced nicely so they almost always do something interesting if not exactly what you wanted to do. Getting lots of allies and upgrades on the table along with their associated dice is going to be key to beating up Kylo and his mates.

The way players take their turns is refreshing. Rather than spending an age on your turn thinking about stuff, you take ONE ACTION. A single action. An action could be rolling dice, attacking, playing a card etc. Then the turn passes to your opponent. You have the option to pass your turn if you don't want to do anything. The round end when both players pass consecutively. This lends the game a really fast pace even when you're still regularly looking up rules.

Sounds alright? That's because it is. There's quite a deep deck building process to go through. The dice feel nice. The dice and turn order means that your opponent doesn't do a million things to you in a single turn and make you salty. The card art is beautiful and you can see the archtypal deck types like mill, agro, control et al. being set up for future expansions.

Would I reccomend it? No. The game is solid but the booster pack distribution model with rarities of cards is just absolute shite. If this was a LCG style thing with a core set I'd have Primed it to myself already. However the starter sets are pre-built and any customisation is going to need some boosters. You're going to fork out lots of cash to get the POWERFUL rare cards. Sorry Star Wars Destiny, it just wasnt... destiny.

I was given Ican Gold for my birthday back in February. Last…