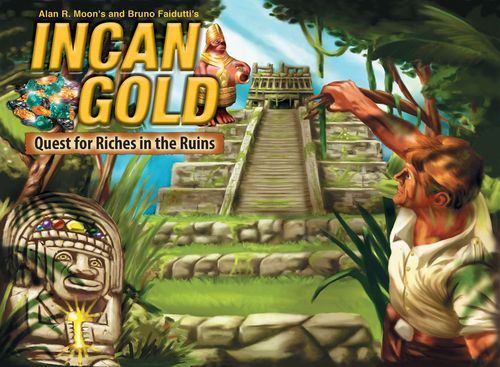 I was given Ican Gold for my birthday back in February. Last weekend we finally took it for a spin.

Incan Gold puts you and your pals in a Indiana Jones style situation where you're venturing into some ruined temple and completely unethically stealing all their stuff while trying not to be killed by rock slides, fire, spiders, et al.

Everyone takes their turn at the same time. This is just deciding if you want to turn back and leave the temple or keep going. If you turn back you take any treasure you've found this round and bank it. If you continue forward there'll be another card drawn from the quest deck.

The quest deck contains treasures that'll be distributed between any players still in the temple when it's drawn. It also contains dangers, like spiders, which are completely harmless the first time you draw one but if you draw another of the same type it'll send you and your pals running as you drop your treasures.

Importantly when you divide your treasure equally you leave any remaining treasure in the temple. This will be picked up by people on the way out. At some point there'll be enough treasure sitting there to tempt players to run out of the temple just to pick it up.

Sounds good right? A fun little push your luck style of game. It's got lovely little components (jewels representing 1, 5 or 10 points, little tents to hide your banked money). It comes in a nice little box with a neat inlay.

The problem is this, Deep Sea Adventure (DSA) is better in every single way.

DSA has an even smaller box. Seriously. The DSA box is about as big as Incan Gold's deck of cards. It has equally nice but fewer components. It's more portable and just generally nice.

DSA is more elegant. In Incan Gold you must reveal your card saying whether or not you want to continue or retreat simultaneously. This leads to a lot of "1... 2... 3... oh no I wasn't ready". DSA has a more standard turn order which means there's a little more down time but the turns are so fast it's not an issue.

Ican Gold has this idea that the amount of treasure you have is a secret. You keep banked treasure in your tent to hide it from your fellow plunderers. This is fine except everyone around the table just saw you score a sweet 20 points in the last round. In addition the amount of points in play means that to keep enough small denominations around you have to keep changing up to the higher ones. Which means the player who keeps saying "Can I change theses 1s for a 10" is obviously loaded. In DSA your banked treasure is visible so opponents have more information to make interesting decisions about risking drowning to score enough to beat you. During a dive in DSA the treasure you collect is secret even from you, you can make a rough guess based on the known values of treasures but you can't be certain. Tension!

When escaping from the temple there's no tension. You draw the second danger card and it's all over. Very abrupt. You choose to leave the temple? Easy, it's done. DSA has the shared oxygen tank which is constantly going down, you can do a quick estimate of how many turns of oxygen you have left and about how fast you can rise to the surface leading to some nail biting finishes.

The theme. "Quest for riches in the ruins" which I guess is the same as Deep Sea Adventure but in DSA I feel like less of a prick about it. You get the feeling that the Incan Gold universe there'll be lots of protesters in the future asking for their shit back. 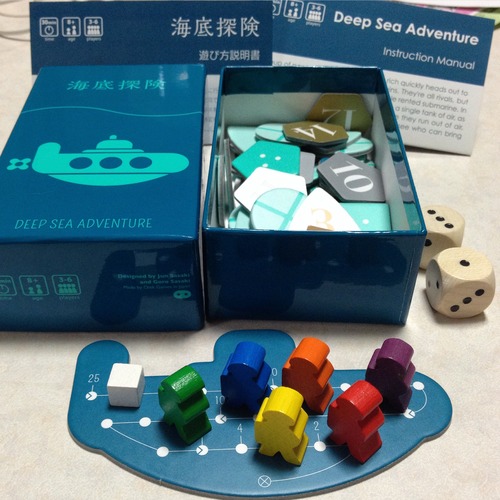 On the last episode of Geek News Radio we (Joe, Mike, Fab…

It's another card game from Fantasy Flight! It's got the Star Wars…